Connecting Relational Databases to the Apache Arrow World with turbodbc

Michael König is the lead developer of the turbodbc project

ODBC is a database interface that offers developers the option to transfer data either in row-wise or column-wise fashion. Previous Python ODBC modules typically use the row-wise approach, and often trade repeated database roundtrips for simplified buffer handling. This makes them less suited for data-intensive applications, particularly when interfacing with modern columnar analytical databases.

In contrast, turbodbc was designed to leverage columnar data processing from day one. Naturally, this implies using the columnar portion of the ODBC API. Equally important, however, is to find new ways of providing columnar data to Python users that exceed the capabilities of the row-wise API mandated by Python’s PEP 249. Turbodbc has adopted Apache Arrow for this very task with the recently released version 2.0.0:

With this new addition, the data flow for a result set of a typical SELECT query is like this: 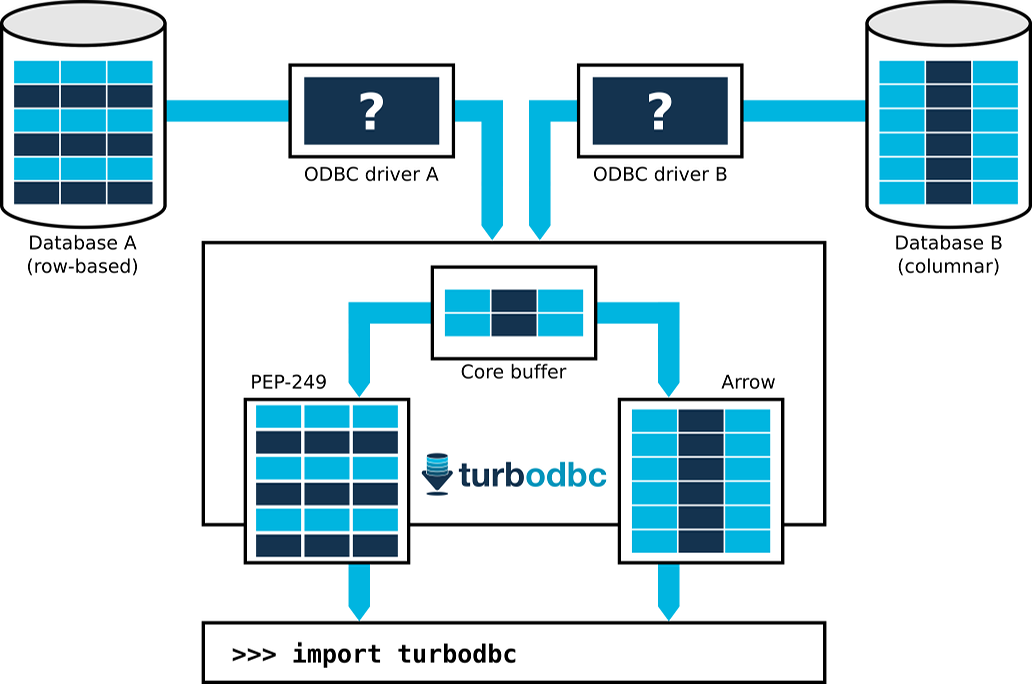 Moving data from the database to an Arrow table and, thus, providing it to the Python user can be as simple as copying memory blocks around, megabytes equivalent to hundred thousands of rows at a time. The absence of serialization and conversion logic renders the process extremely efficient.

Once the data is stored in an Arrow table, Python users can continue to do some actual work. They can convert it into a Pandas DataFrame for data analysis (using a quick table.to_pandas()), pass it on to other data processing systems such as Apache Spark or Apache Impala (incubating), or store it in the Apache Parquet file format. This way, non-Python systems are efficiently connected with relational databases.

In the future, turbodbc’s Arrow support will be extended to use more sophisticated features such as dictionary-encoded string fields. We also plan to pick smaller than 64-bit data types where possible. Last but not least, Arrow support will be extended to cover the reverse direction of data flow, so that Python users can quickly insert Arrow tables into relational databases.